The writing of Irish philosopher-poet, John O’Donohue, has long influenced my spiritual path and way of seeing the world. In my view, and I know I’m not alone in this, all of his books are sacred texts, and they all grace my bookshelf, most with pages dog-eared and written on. As a chaplain and spiritual companion I’ve often offered his poems and blessings to those in need from his book To Bless the Space Between Us.

His book I most treasure though, is Beauty, The Invisible Embrace. My paperback copy is worn and ragged with so many passages highlighted that most pages are orange. I refer to his words often to inspire my own contemplative photography practice. The myriad ways in which O’Donohue invokes beauty is simply breathtaking.

So when planning a recent trip to Ireland with my dear friend Mary, who was making her third pilgrimage to the Emerald Isle, I insisted that we visit his grave. To me that was more important than seeing the Cliffs of Moher if we had to make a choice. And, if we could find a hardcover copy of his book Beauty, I would feel complete.

O’Donohue is buried in the landscape of his home, the Burren of County Clare along the Wild Atlantic Way in a small unassuming cemetery overlooking the sea. There’s no church, only a ruin, and a driveway you can easily miss even with Google maps. On a blustery windswept day in May 2022, I pulled the car into the cemetery drive. We walked through the gate, splitting up in different directions looking at newer headstones first, since he had passed in 2008. What we found was a family headstone, looking like an ancient standing stone, with several names carved in, including his. At the base, other pilgrims had left painted rocks, a coffee mug, candles, a flask, and some silk flowers.

Within minutes of finding the family plot, a taxi pulled in and the driver helped a woman get out. She was slightly bent over, walking very slowly and carefully. As if we had been waiting for her, we called out, “Hello, how are you?,” and walked over to greet her. She told us her name, and that she had a slipped disc and was getting on a plane to fly home for surgery, but not before she paid homage to John O’Donohue at his grave. So there we were, strangers who, in an instant, became friends.

Supporting our fellow pilgrim under each arm, Mary and I carefully guided her between burial plots in the shortest, most level and direct path to the grave.  There, we chatted for a few minutes about O’Donohue’s work and how much he impacted our lives. Then I remembered that Mary had a small bag of crystal pearls––amethyst, aventurine, and rose quartz––that we had been sprinkling around various Faerie habitat in appreciation to them for allowing us to visit their space.

We each chose two or three crystals and held them reverently while I said a brief blessing, giving thanks to O’Donohue for his time on earth and his gifts that live on. We then asked permission and sprinkled the tiny crystals on his grave. After a moment of silence, we walked our new friend back to her taxi and wished her God speed and easeful healing. She thanked us for being her angels that day, and they drove off. For a moment we sat in silence in our car, wide eyed in awe of the mystery and magic of what just took place. 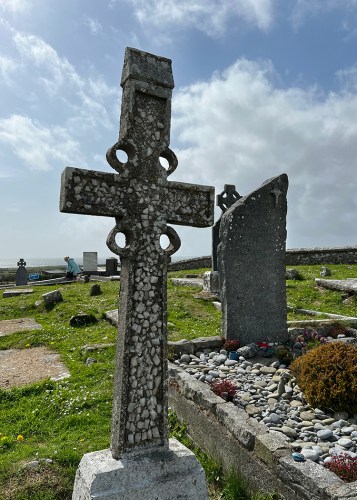 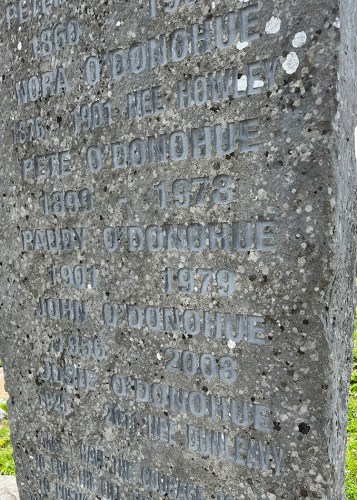 Each village we passed through we would stop at the local bookstore and ask if they had a hardbound copy of O’Donohue’s Beauty. It wasn’t until after we visited his grave, that the book appeared. We were in the town of Clonmel, in County Tipperary, when we entered a small musty smelling used book shop. I poked around for a few minutes looking in sections where I thought it might be, (I was looking for a green cover) and then I walked out, saying to Mary, “It’s not here.”

Once outside, Mary stopped in her tracks and announced that she was convinced it was there, so following her intuition we went back inside.  We asked the proprietor, and he pointed us to a shelf behind his counter and said we could look there. Within seconds, Mary laid her hand on a pale yellow book, pulled it from the shelf and asked, “Is this it?” Much to my dismay and joy, it was!  It was in pristine condition except for a little love note on the opening end sheet. Now, I was complete and Mary’s intuition was honored. 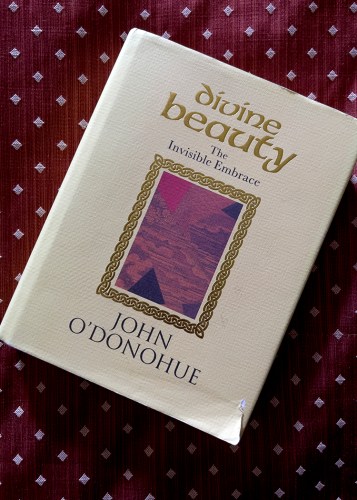 The magic continued even after returning home. During my own spiritual direction session, I shared this story with my director. She closed our time together with a short poem she had chosen before we began. It was titled, On Meeting a Stranger which you can find in O’Donohue’s book To Bless the Space Between Us.

I personally believe that none of this was accidental. If one is willing to live with an open heart, the Divine spark will play with you between the seen and unseen worlds. With deep and humble gratitude to the Spirit of John O’Donohue 1956-2008, his gifts that live on, and the Angels and Guides on our life’s journey.

You can learn more about John O’Donohue at the website of his literary estate: https://www.johnodonohue.com/

Yesterday’s meander in the Fairfax Hills. Gorgeous day! Trails slightly battered and creeks still running from the rains. But we’re not spring green yet! Last shot is of offerings in a tree hollow. Funny story, we’re walking along and this gentleman with a dog passes us, and out of the blue asks, “Are you both twos on the enneagram?” We respond, “No, why?” 😳 He says, “You’re both wearing purple and pink.” !?! Only in California…Now I have to look it up. 😂😂#morningmeanderings #natureheals #enneagramcolors